Who Watches The BlowHard News Network? 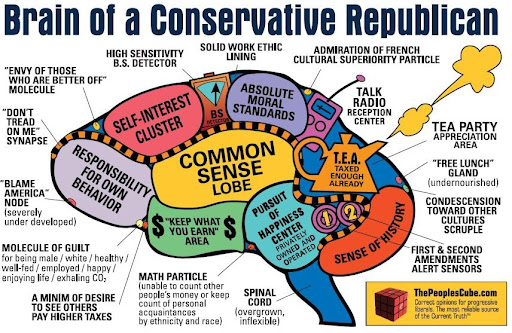 57% Proves we ain’t the smartest country and our drugstore patriots are blue-ribbon dumb.

"The fatal assumption was that Americans would choose to think and learn, instead of cherry picking the blogs and TV channels to reinforce their particular branded choice cultural ignorance, consumer, scientific or political, but especially political.

Tom [Jefferson] and Ben [Franklin] could never have guessed we would chase prepackaged spectacle, junk science, and titillating rumor such as death panels, Obama as a socialist Muslim and Biblical proof that Adam and Eve rode dinosaurs around Eden. In a nation that equates democracy with everyman's right to an opinion, no matter how ridiculous, this was probably inevitable. " Joe Bageant

"Cultural stupidity might not be so bad, were it not self-reproducing and viral, and prone to place stupid people in charge. All of us have, at some point, looked at a boss and asked ourselves how such a numb-nuts could end up in charge of the joint. " -Joe

A "defender of the faith" apparently unaware that our own numeral system is the Arabic, wrote this:

it's only funny until you have been to Arab nations and learn our "arabic numerals and their/there Arabic numericals are NOT the same. Theirs make sense only when you lie down and squint because they are sideways horizontal...not vertical and upright....(at least the few I knew) for example their "3" looks like our lower case "m."

Well hell, no WONDER why that poll result occurred. 57 per cent of those who took the poll had experienced lying down and squinting to read the numerals.
- August 05, 2021 No comments:
Email ThisBlogThis!Share to TwitterShare to FacebookShare to Pinterest
Labels: Amerika is Number One, Kindergarten Konservatives, Kindergarten Kristians

What Does God Want You To Do?

We of Evangelical Rightists for Trump would like to clarify a few points that have mislead all you brothers and sisters for two centuries.

Who wants literal interpretation of Religious Scripture?
The real Jesus

Who declares that there is only one TRUE God?
The real Jesus

Who rejects the theory of evolution?
The real Jesus

Who wants mandatory prayer in school?
The real Jesus

Who wants to weaken separation of church and state?
The real Jesus

Who wants censorship?
The Real Jesus

Who favors Iron Rule of Law and Order?
The real Jesus

Who favors the death penalty?
The real Jesus

Who declares that dissent is disloyalty?
The real Jesus

For the Blowhard News Network,
I'm The Most Righteous Reverend, Franklin Duminyon

- July 30, 2021 No comments:
Email ThisBlogThis!Share to TwitterShare to FacebookShare to Pinterest

In a nutshell folks, the most patriotic approach to describing the tactics of our Noble Senate Defense-Of-His-Worship Team is this.

- February 12, 2020 No comments:
Email ThisBlogThis!Share to TwitterShare to FacebookShare to Pinterest

Gosh! We thought our point-of-a-gun global diplomacy would have a longer life than this. 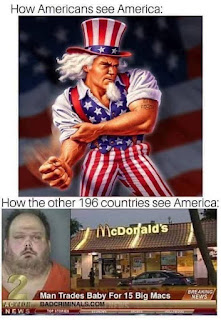 Just so you can understand. Led by our vociferous Commander in Chief, Foreign Policy Expert In Chief and Trade War General in Chief, we continue to be the greatest country on the planet and the greatest exporter of Sacred Corporate Capitalism ever seen in the annals of recorded time.

This is your BNN Rebuttalist report for Tuesday, July 31. I'm Flush Limberger.

- July 31, 2018 No comments:
Email ThisBlogThis!Share to TwitterShare to FacebookShare to Pinterest
Labels: Amerika is Number One
Home
Subscribe to: Posts (Atom)
Welcome to
Uncles Doofus Broadcasting
From our broadcast studio in the
Elk Snout Tavern
in beautiful downtown
Buffalo Chip
Somewhere in the Inland Northwest

The Elites Who Tell You How the Cow Ate The Cabbage

It's a Man's World and We Are The Handmaids

Never Heard A Rumor They Didn't Start or Wouldn't Swear By

57% Proves we ain’t the smartest country and our drugstore patriots are blue-ribbon dumb.

"The fatal assumption was that Americans would choose to think and learn, instead of cherry picking the blogs and TV channels to reinf...